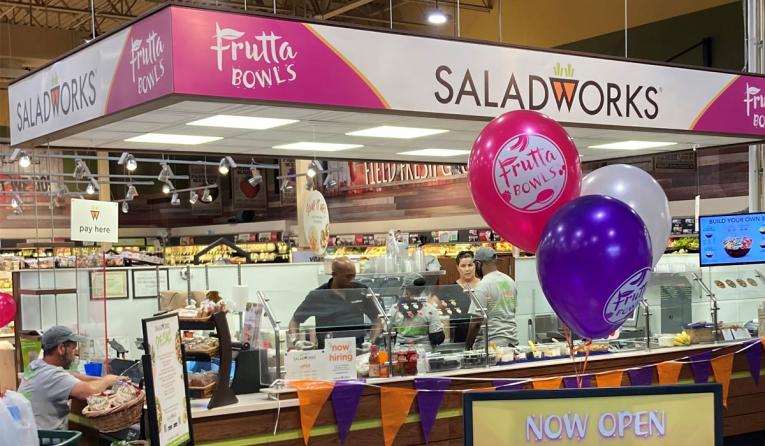 Is Co-Branding Making a Comeback in Restaurant Franchising?

It’s too early to say, but it looks promising new Saladworks locations will incorporate Frutta Bowls as a co-brand on a permanent basis.

So bringing the two together in a joint store felt a natural extension once WOWorks acquired Frutta Bowls in December 2020. The first Saladworks and Frutta Bowls co-brand debuted in East Norriton, Pennsylvania, in early June. The next came only a few weeks later in The Fresh Grocer in Wyncote, Pennsylvania.

“We were thinking of the opportunity to co-brand these two brands, quite frankly, as we were looking to purchase it and we thought what a great marriage that would be,” Roddy says.

Already, the financial results have stood out, Roddy says. After adding Frutta Bowls to a Saladworks location, the restaurant saw a 50 percent jump in sales. People who originally show up wanting a salad end up getting an acai bowl, too, or vice versa.

The co-brand remodel brightens the restaurants, Roddy adds, and he’s excited to grow concept further. That means half a dozen new co-branded restaurants over the next few months. Some of these will be original Frutta Bowl locations that add Saladworks into their operations.

It’s too early to say, but it looks promising new Saladworks locations will incorporate Frutta Bowls as a co-brand on a permanent basis, Roddy says. Combo kitchens with other non-WOWorks brands may be a thing in the future as well.

WOWork’s integration of Saladworks and Frutta Bowls is the latest development in a co-branding resurgence for restaurants. And it’s extended to include virtual concepts.

Roddy says putting two physical brands in the same unit is exciting because with one kitchen, the cost of operations is less. Franchisees get the opportunity to own two brands, both of them serving the same healthy purpose in WOWork’s case. Additionally, with the benefit of two brands, guests tend to visit more frequently.

“It does add a bit of complexity, but it’s complexity that’s worthwhile because we get a return on your investment,” Roddy says.

FOCUS Brands has also seen how worthwhile co-branding can be. Around half of its restaurants, which include Auntie Anne’s, Carvel, Cinnabon, Jamba, McAlister’s Deli, Moe’s Southwest Grill, and Schlotzsky’s are associated with the others, with just shy of 150 co-brands in its portfolio.

For roughly eight years, Auntie Anne’s and Cinnabon have together greeted guests at malls and airports. In recent times, FOCUS expanded co-branding capabilities by connecting Cinnabon with Carvel and Jamba with Auntie Anne’s, and even a tri-brand of Auntie Anne’s, Cinnabon, and Carvel.

FOCUS made these decisions based on consumer insight of what brands made the most sense working in tandem. Through this insight, the company also decided to move away from building captive audience venues like airports and malls and instead turned to more traditional locations. Malls especially are on the decline. In fact, Coresight research indicates 25 percent of U.S. malls could close within five years.

The advantages of co-branding are numerous: the economics alone drive many brands to explore creating a shared space with each other. You need less labor. Consumers come more frequently because of the variety of offerings from a co-brand. You might want a smoothie for yourself from Jamba and an Auntie Anne’s pretzel for your kids. A co-brand enables access to different types of customers during different dayparts. Operators share the cost of real estate, meaning they can go after better real estate. All in all, co-branding can drive profitability.

“When you have two revenue streams in one building, it allows you to pay a little more rent and go after more of a main street or hard corner for development, which allows you access to better visibility and more customers,” Krause says.

Still, FOCUS says, co-branding doesn’t offer the same opportunity for everyone. The company is uniquely positioned with its breadth of brands and experience in matching those restaurants together.

There are some downsides, or maybe more just obstacles, however. Optimizing customer experiences with equipment and kitchen flow can prove challenging. Instead of just learning one brand, operators must develop a muscle memory around two concepts, Hartman says.

“It doesn’t necessarily come easily,” Hartman says. “You’ve got to put a lot of focus on it. It’s not a matter of just simply saying you’ve got two brands, you’re going to put them in one space. It takes a great deal of effort on the part of the teams to make sure that you’re setting your franchisees up for success when you bring two brands together in the same space.”

The importance of picking your spots cannot be overstated for the FOCUS team, and that’s what co-branding empowers Auntie Anne’s, Carvel, Cinnabon, and Jamba to do well.

“Keeping both brands and their unique identities intact as you merge them together with all the efficiencies that we’re looking for is key in the market,” Krause says, adding that having the right franchisees with the right passion was vital for FOCUS in finding co-brand success.

Another example of a successful co-brand initiative is taking shape within FAT Brands. Today, FAT Brands has more than 100 restaurants co-branded, primarily Fatburger and Buffalo’s Cafe Express locations. But the journey started nearly 10 years ago when FAT Brand acquired Buffalo’s.

CEO Andy Wiederhorn says as a primarily burger place, Fatburger lacked brand awareness for its chicken products. When FAT Brands tried out the co-branding approach in a Los Angeles location, it was widely successful, and franchise partners adopted it rapidly. Around the world, 50 percent or more of Fatburgers are now co-branded. Due to this, FAT Brands saw a 20 percent increase in average sales volumes.

The other co-branding initiatives FAT Brands undertook included a partnership between Elevation Burger and Hurricane Grill & Wings. And there’s more coming—Hot Dog on a Stick will soon be launched across FAT Brands’ burger chains.

Wiederhorn observed many restaurant companies attempt to start virtual brands and engage in co-branding. But these virtual concepts usually lack a solid identity.

“I think it’s very hard to make it work,” Wiederhorn says. “It’s not a recommended path for a startup concept. I think it’s a very, very strong path if you have an established brand in the market.”

In order to successfully co-brand, both restaurants need brand recognition, Wiederhorn says. But if a duo of concepts can pull it off, they will reap the benefits of greater menu diversity and franchising incremental profit and royalties. The one caveat: on the supply chain side, operators must guarantee they are doing enough volume that they don’t have waste or spoilage in their inventory.

Roddy says it’s also important that the brands merge together well. Co-branding two restaurants that do not have complementary features may be a recipe for disaster.

“Just because you own two brands doesn’t mean that it’s a good marriage,” Roddy says. “I think you have to find something really where two plus two equals five, so that the two brands that you put together make a lot of sense.”

Wiederhorn adds: “You don’t want to create confusion for your customer in terms of the menu or the ordering process. So keep it simple.”

If you’d like more information about becoming a Saladworks franchise owner, please complete our Contact Us form on https://franchise.saladworks.com/#contact