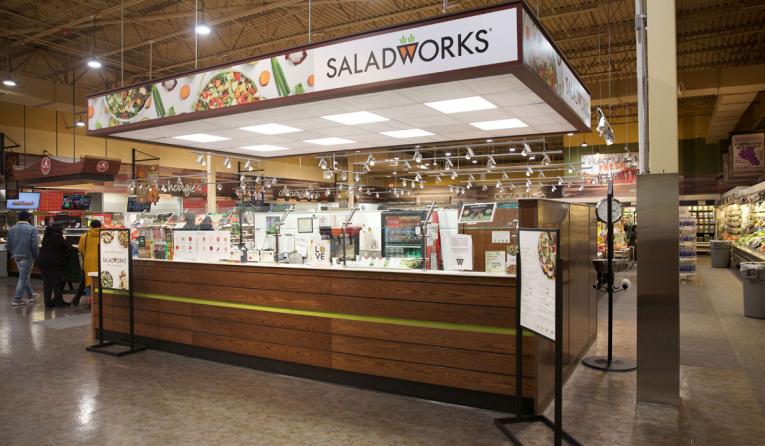 WOWorks, parent company of Saladworks, Frutta Bowls, and Garbanzo Mediterranean Fresh was featured on PYMNTS.com this week regarding our non-traditional grocery store locations and the consumer trends post-pandemic. Our CEO, Kelly Roddy, shared valuable insight on this topic.

Rather than bending over backwards to bring consumers to them, restaurants are increasingly investing resources in meeting consumers where they are. In its most literal usage, this takes the form of restaurants delivering to customers’ doors more than ever. However, the trend has ripples beyond just the shift to delivery. When it comes to restaurants’ physical footprints, for instance, many chains are opening non-traditional locations that make their brands more accessible than ever.

WOWorks, for example, is a restaurant group that encompasses a range of quick-growing plant-based fast-casual brands targeting millennial and Generation Z consumers. It opened its first in-Walmart location last week, as part of the restaurant group’s broader ghost kitchen push.

“Convenience means you should go wherever you know the guests are,” WOWorks CEO Kelly Roddy told PYMNTS in an interview. “[It’s] personalization — I know what I want. I know how I want it. I know when I want it. I know where I want it. You really have to be everywhere. … The pandemic has accelerated everything by years. … We look at brands where you can personalize, you can customize, and it is convenient.”

Research from PYMNTS’ study  The Bring-It-To-Me Economy, created in collaboration with Carat from Fiserv, a census-balanced survey of over 5,200 consumers, found that 58% of consumers are ordering restaurant-made food online more than they were before the start of the pandemic. In fact, they are now 31% likelier to eat their restaurant orders at home than they are to dine at a restaurant.

WOWorks, which is fully owned by Centre Lane Partners, LLC and which includes the brands Saladworks, Frutta Bowls, Garbanzo Mediterranean Fresh and The Simple Greek, has hundreds of locations across the United States. The group formed in 2020 after Saladworks acquired two additional restaurant brands.

Roddy noted that the partnership with Walmart allows the company to bring its restaurants to a wider audience.

“Walmart’s in most communities in the U.S. and as we grow this program, there’s an opportunity to get our product in a more convenient way to people,” he explained.

WOWorks’ restaurants come to Walmart through a partnership with Ghost Kitchen Brands. The ghost kitchen company’s president Marc Choy recently spoke to Karen Webster about how the partnership benefits Walmart, helping the company adapt to changes in how consumers are getting their food needs met.

“The dynamic of the 1950s where somebody would cook six square meals a week and maybe go out once a week is going to be totally the opposite,” said Choy. “This is how people are going to know how to get their food — by ordering.”

For its part, WOWorks is seizing on the need for grocers to adapt to these shifts, partnering with several of the grocery industry’s key players. Roddy highlighted partnerships with Kroger, Ahold Delhaize’s Giant brand, Wakefern’s ShopRite brand, and The Fresh Market, among others. He added that, as pandemic-changed consumers steer clear of salad bars and buffet offerings, these restaurant-in-store partnerships have the opportunity to take over as the main way consumers get their food needs met in grocery stores.

Reflecting on his five years at Texas grocery chain H-E-B in the mid ‘00s, he recalled, “In my day, we never would have thought you’d have sushi bars inside grocery stores being prepared right in front of you … and now you can’t go into a grocery store, or at least a large grocery store, where there’s not a sushi bar.”

The major changes in consumers’ habits occasioned by the initial outbreak of the pandemic have demanded a different restaurant model. For one thing, it changed what consumers wanted out of the food itself.

Roddy noted that young consumers especially want to be able to customize their meals to their own health needs and desires, arguing that the “how I want it, where I want it, when I want it” mentality of the on-demand economy extends to how consumers think about the menu itself. On the flip side, consumers also want to have the option to make their meal more indulgent, when the mood strikes.

Sure enough, a study highlighted in PYMNTS’ June 2020 How We Eat report found that, in the months following the start of the pandemic, consumers’ diets polarized, with huge demand for options on both sides of the nutrition spectrum. 39% of those surveyed reported eating healthier foods, while 40% said they were eating more “indulgent” fare.

He explained, “Everybody has a loyalty program [but] it really can’t just be loyalty — you come 10 times and you get an X. It’s really, how do you engage?”

He added that WOWorks reframes its rewards programs as “engagement” programs, noting that the company focuses on tailoring its messaging to individual consumers, focusing on giving them the offers that they personally would want.

The Footprint of the Future

WOWorks has been focusing on opening new non-traditional locations, including ghost kitchens and food trucks.

He noted that consumers want the option to get food brought to them or to pick up food wherever they may be. Still, he stresses that the traditional, in-person dining experience will remain critical, with consumers continuing to seek out opportunities to connect with others over food.

“I do think the four walls of brick-and-mortar are going to still play a big, big part,” he said. “But I also think the click-and-order is also going to be very, very big going forward as well.”

He added that the mix of digital sales has skyrocketed from low single digits before the pandemic to “a full third of the business,” while restaurants that provide an appealing on-premises experience remain central to the company’s plans for the future.

PYMNTS data from the 2021 Restaurant Readiness Index, created in collaboration with Paytronix, found that only about a third of all restaurant sales are currently on premise, encompassing both indoor dining and outdoor seating.

As far as predicting where the off-premises/on-premises mix is headed, Roddy said, “I believe, in the future, it’ll be pretty much half and half.”

If you’d like more information about becoming a Saladworks franchise owner, please complete our Contact Us form on https://franchise.saladworks.com/#contact.